WELCOME TO THE HOME PAGE OF AMERICANA SINGER-SONGWRITER EILEEN BERNSTEIN!

Eileen Bernstein started out as a Translator of Spanish, French, and Chinese. Eileen's musical style is a Baltimore-tinged Americana fusion of Sheryl Crow, Jewel, Indigo Girls, Sara McLaughlin, and Stevie Nicks that has taken audiences up and down the peaks and valleys of life at festivals, songwriter showcases, and coffeehouses throughout the DMV (District of Columbia, Maryland, and Virginia). “Endless Night,” off her No Place But Up EP, has been played on digitalrevolutionradio. "No Place But Up," "Startin' Somethin' Good," and "Endless night" have been requested and played on WHUS Radio UConn. She likes to write octave jumps into her melodies, and her musical influences are varied as Evanescence, Journey, Miranda Lambert, Katy Perry, Foreigner, Sara Bareilles, Keith Urban, Green Day, Kacey Musgraves, and Gretchen Wilson.  Currently residing in Nashville, born and raised in New Jersey, and a long-time resident of Howard County, Maryland, “this talented performer…in a lyrical sense goes quite a bit deeper than your standard [Nashville] Broadway fare.”  -- Music City Musings.

Music for the Peaks and Valleys of Life - blog

First, the news on this Eileen Bernstein blog channel. Hey I’m a journalist – reporting on my own music career ha ha. On October 22, I will be playing a very special writers round in Monteagle, TN at 8:30 PM. Randy Finchum is the host who kindly invited me. He has written hits for Sammy Kershaw and has 60+ songs recorded by various artists. Randy recently played a song I wrote with Bob Huston on Randy’s radio show on hleradio.com WKLF 95.5 FM and 1000 AM in Clanton, Alabama.

I’m working on a video for an upcoming release of a solo write. Hint – it involves water. Another song, which I’m cowriting with Scott Barrier and got delayed due to the pandemic is now finished.  We are in production mode and trying to find a male pop demo singer. This one will be for sync licensing – film/TV/ads so we won’t be releasing it.

It’s easy to get caught up in regret for the goals we have not accomplished, especially when periodically reevaluating whether life is going in the desired direction. I encourage you to think instead in terms of what you HAVE accomplished. Here is mine (spanning many years):

Studied Spanish, French, Chinese, Italian, Russian, and Hebrew.
Lived in Spain and traveled around France.
Became a translator.
Raised healthy, happy, independent kids.
Made new friends in Nashville and reconnected with old friends.
Learned to record songs at home.
Got some songs on the radio.

Will you share your positive accomplishment list with me for celebration not judgement? I wish you as beautiful a fall as the bright colors of the changing leaves.

My biggest valley this year has been not seeing my kids or my parents at all due to the pandemic. We live in 4 different states.

Now for the peaks –

I have another song, Old Wives Tale, demoed by my co-writer Bob Huston here in Nashville, who has just released the song and plans to put it on his next EP. You can find it here: http://reverbnation.com/bobhuston/song/32333348-old-wives-tale

My guitar accompanist, Greg Tape, has been helping me get familiar with my recording software so that in a couple weeks I expect to have one huge arrangement done. We are paring down over 50 tracks!

I have been enjoying the binoculars Greg got me for Chanukah. On Friday I pulled up to my favorite overlook by the Harpeth River at sunset, and watched a snake swim by with its mouth open and tongue flicking in and out. The woodpecker in our yard evades me, however. Every time I run out back to take a photo, he flies away. It reminds me of how evasive this year has been. Every time we think we have established a routine to “deal with” the chaos, the new normal we have built flies out of our grasp. Which is why I appreciate every fleeting moment of happiness and success. Now more than ever, I am touched by how you stay with me on my music journey.

Please write me about your news and stay healthy and sane!

I hope all of you are continuing to stay healthy and free of COVID19!  A woman in France I never knew was a fan tuned in to one of my Facebook Live sessions, and I replied to her in French. I have finished 3 new songs – one is a solo write and two are co-writes with other Nashville based songwriters. When I’m not writing I’m calling friends to see how they are doing. The cruelty of this pandemic in robbing people of their loved ones really hit home for me even more how someone can suddenly be gone from this earth. Which brings me to the inspiration for my new song, “Crossing Bridges.” If the pandemic doesn’t motivate families who have been torn apart by disputes to reunite, I don’t know what will. Below my YouTube challenge is  a link to the YouTube video. Let me know your thoughts on “Crossing Bridges!”

YOUTUBE CHALLENGE: if you help me reach 100 subscribers on my YouTube channel, I will enter you into a contest to win a signed copy of the lyrics to one of my songs. I will scan it and email it to you as a thank you. Crossing Bridges

Besides writing and calling friends, I’m job hunting – gotta pay for the music habit until it starts to pay for itself and for my living expenses. I’m also taking walks past the cattle ranches and enjoying the company of a purebred Australian shepherd dog who follows me down the street. Guess he wants to make sure I’m not up to no good lol!

This week on my journey through the peaks and valleys of life:

I’m starting off 2020 with some airplay! The peakofmyweek was learning that “Startin’ Somethin’ Good” and “Endless Night” will be broadcast this Sunday, March 1 between 7-9 AM EST (6-8 AM CST) on WHUS UCONN 97.1 Square Pegs & Round Holes, hosted by Chicopee John. The deejay played the title track from that EP, “No Place But Up,” just a couple weeks ago. I also have a new single coming out soon – will keep you posted!

There has been some new activity in the co-writing arena. I had my first artist co-write and she seems interested in recording the song we worked on. Before y’all jump up and down with joy, here’s the reality check songwriters have to always give ourselves: it’s not a done deal until the song is actually released to the public. In fact, some of my co-writing sessions have been postponed for several months because they are busy touring and writing with other artists and songwriters. That having been said, I’m excited about all these new opportunities from persistently and consistently networking, showing support for other musicians, and playing writers rounds.

I guess a sign of things to come happened when one of our neighbor’s cows made a breakout through a hole in the fence and showed up in our front yard, calmly eating the grass. This went on for about a week, and I got a couple photos.

Hope your year is going great! 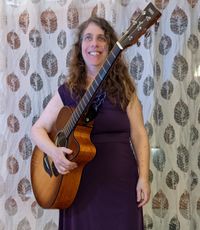 An evening of originals! I'm on at 8:00 PM with Wendy Duncan. Come at 6:00 and enjoy dinner with your music appetizer. Hosted by C4!

Songwriters Round at the Smokehouse

Sharing the stage with Paul Ivy and Justin Love. Hosted by Randy Finchum.

Writers Round at Brentwood Suites

My first writers' round since the pandemic began! Kicking off the evening with me and Bob Huston. Can't wait to play for y'all again!

Have some music with your coffee! Writers night hosted by Jaye D. Marie. I hear it's the best coffee in town. 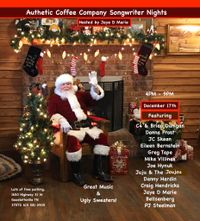 Coffee and Songs for the Holidays!

A songwriters night with coffee and ugly sweaters for the holidays! 4-9 PM (Greg and I are playing around 8 PM).

Join the Cloud Niners Fan Club -- details at: /cloud-niners-fan-club Every month you will get VIP rewards as a thank you for your support of this musical life journey we are sharing. Your membership will help me continue to write and release new songs for you, and you will get an insight into my creative process. There is only one tier -- The Gold Tier of the Cloud Niner Fan Club gets you rewards ranging from autographed CDs to monthly music chats. See you on Cloud Nine!